Why I Got Terminated from My Network Marketing Company 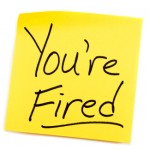 I had a conversation with a good friend of mine the other day who just got his check pulled from his network marketing company, after building it for over 11 years.  Certainly, NOT a fun situation, considering he was pulling in a significant amount of money without having to work.

We had a chat and I asked him about his situation.  I'll leave his name out of it for confidentiality purposes, so we'll instead call him Term.

Meet Term.  Term is a veteran of the profession.  He's built two companies over the past 17 years of being in the business.  The first one he was in unfortunately had some issues and went out of business.  His most recent company, the one he was just terminated from was one he devoted most of his life to for the past 11 years.

Term:  Todd, I just got canned from my company.  They pulled my check.

Todd:  They pulled your check.  Why?

Term:  I started to build someplace else.

Todd:  Why would you do that?  Is your company having issues or going out of business?

Term:  No.  We're certainly not in momentum, but we're also not going out of business.

Todd:  Why then would you go build something else, considering how much you're earning and how much you have to lose?  Did you crossline recruit people from your current company into the new one?

Term:  No.  I haven't talked to anyone in my company, not even my personally sponsored.  I was bored and wanted to try something new.

Todd:  Wait.  You were bored?  You've been with them for 11 years and worked your ass off to get where you are.  Isn't that what you worked so hard to create…a residual income that you didn't have to work any longer for?

Term:  Well…obviously if I had to do it all over again, I wouldn't do it.  I made a bad decision.  And…I don't think there's any chance they'll let me come back.

Todd:  Have you gone back to them and asked?

Term:  No…I've only been in discussion with their legal department.  Once they heard I was doing something else, they pulled my check.

I won't go into the rest of the conversation with you on this post, but a lesson learned for sure.  I've been in this business for over 20 years and never had a check pulled, and never even got an email or a letter from a company I was in with even a warning.  Why?  Because I've always played by the rules.

Companies generally terminate people for cause.  The “causes” can be varied, but most of the time, it's because someone significantly violated the Terms and Conditions of the Independent Distributor contract one has with their company.

Read you POLICIES AND PROCEDURES.  Most people don't.  And…I do mean MOST.  I would guess that well over 90% of the people who are in network marketing get their kit and never both to read the terms of their contract.

When you get into a leadership position like my friend Term, and you are as visible as he, you have to be even MORE careful to abide by the rules of your contractual agreement you have with your company.

If you don't ever want to get terminated from your company, I have some simple suggestions:

The purpose of this post is informative in nature, not meant to scare anyone.  You shouldn't be running scared every day as long as you're doing stuff that legal, ethical, moral and fits into your company's policies.

You don't want to be like my friend Term and have your check terminated, especially as hard as one must work to get to that level.

Read the rules.  Play by the rules.  Put your head down.  Maintain your focus.  All will be good in your world.

Todd Falcone speaks and trains on the subject of network marketing success and helps people move to a position of achieving Network Marketing Mastery®. He also consults network marketing company owners as well as coaches and trains top-level distributors throughout the profession. Todd is a husband to his wife Carla, and a father to his two boys Gianni and Joey. He’s a surfer, a skier, a golfer, and loves to fish and play in the outdoors. Start accelerating your network marketing business today, download Todd's latest CHEAT SHEET on this page.

The Fine Art of Crossline Recruiting

Here’s How to NOT Get Terminated from your MLM

Five Ways To Be More Consistent

How to Kill Your Business this Summer

Why Skills are Crucial to Your Success