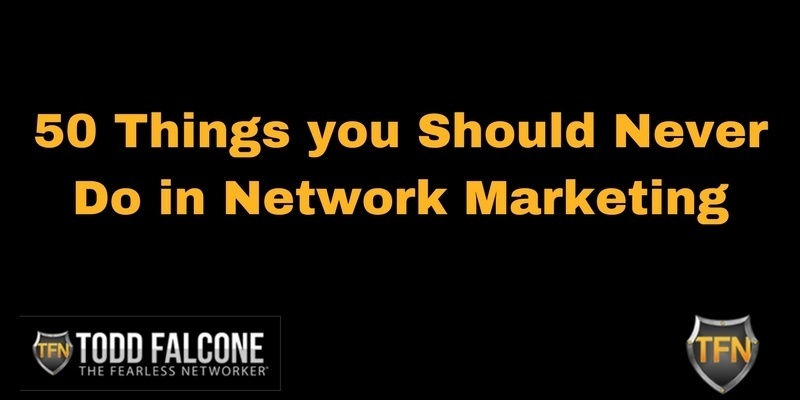 50 Things you Should Never Do in Network Marketing

I was asked to contribute to a Facebook Live the other day and the host wanted me to talk about “Things you Should Never Do in Network Marketing”.  It got me thinking…

Since I'm home with a busted up knee that can't move for a few more days, I wrote down a list of 100 Things you Should Never Do in Network Marketing.   They aren't in any particular order.  I just let my brain do the work by looking back at my long career in this profession and came up with this list of 100 things you should never do.

50 Things you Should Never Do in Network Marketing

#1:  Don't exaggerate your earnings.  It's a lie when you tell someone you're making 10 grand a month when you're not even close to it.  Tell the truth.

#2:  Don't make big bold product claims that can't be substantiated.  It hurts the overall brand you represent and puts you and your entire company's future at risk.  Don't do it!

#3:  Don't be a flake.  Nobody likes doing business with people who don't keep their promises.  Do what you say, and then some.

#4:  Don't steal.  Don't take someone's prospect, product, or anything else that would be considered stealing…including someone else's limelight!

#5:  Don't cheat.  Gaming your comp plan is a no-no and most companies frown on it.  You're taking advantage of the system when you try to “game” the plan so you can look good or earn more.  I've seen people terminated for “gaming”.  Not good.

#6:  Don't quit.  Yea.  I know.  You've heard it a million times.  But, how can you cross the finish line when you don't even finish the race?  There's no winning in quitting.  There's no placing.  There's nothing for people who quit.

#7:  Don't be a boss.  You're not your team member's boss.  So, don't act like it.  They came to network marketing for the freedom to be themselves, not to be bossed around.

#8:  Don't pay someone's way in.  They'll have no “skin” in the game.  You've just crippled them before they even begin.

#9:  Don't cross-line recruit.  Stealing isn't cool.  Snaking someone's prospect because you think you're a better sponsor, especially when that person is in your own downline who you're stealing from is simply weak, pathetic and lame.

#10:  Don't bad mouth other networkers.  They'll find out about it.  People talk.  It's an ugly quality that you don't want to be exhibiting, even in the slightest.

#11:  Don't gossip about people.  Same as above.  Gossip is ugly.  Gossip by definition, isn't true or substantiated.  It's secondhand knowledge.  Furthering the conversation that you can't personally confirm as accurate is simply not good.

#12:  Don't screw someone else over for your personal gain.  Only do things that are win-win.  Win-lose is never good in business.  Taking a shortcut because it's in front of you, when you know full well that someone else will lose isn't going to help you build relationships in this business.

#13:  Don't build it for them.  Why would they ever build if they think you'll do it for them?

#14:  Don't be ALL business ALL the time.  People like to be around individuals that can separate the “business” from just living life and being themselves.

#15:  Don't tell someone to do something you aren't willing to do yourself.  Leadership means being willing to do anything and everything necessary to get the job done.

#16:  Don't play favorites.   People see it, know it, and do less work because of it.  I'm not saying don't reward producers who deserve the extra attention, but don't play favorites because you “like” someone more.

#17:  Don't whine and complain.  Nobody likes being around negativity.

#18:  Don't keep changing your mind every week.  People on you team are looking for stability.

#19:  Don't build multiple companies at the same time.  If your goal is go GO BIG, then stick to one.

#20:  Don't steal someone's intellectual property and call it your own.  If someone else wrote it or produced it, it's not yours.  Sure…use it, but make sure you give the original person full credit for it.

#23:  Don't get distracted from what matters most (23 is my magic number, so it's here twice).  Your time should be invested in activities that really matter.

#24:  Don't constantly look at other deals.  Put your blinders on.  You aren't being as productive as you can be when you keep looking around to see if the grass is greener somewhere else.  The grass is greener where you water it.

#25:  Don't compare yourself to others.   There's always going to be someone who is better than you, faster than you and makes more than you in a shorter period of time.  Comparing yourself and allowing it to get you down isn't helping you get ahead.

#26:  Don't forget to right your wrongs.   If you do something wrong or make a poor decision, make amends quickly.  Don't allow it to fester into something bigger than it already is.

#27:  Don't allow your fears to dictate your decision-making.  Everyone has some fear of some thing.  In network marketing, people are so afraid of what others think, the oftentimes don't act.  The fear is ruling their decision-making.

#28:  Don't allow your ego to get the best of you.  There's a fine line between self-confidence and arrogance.  Be careful not to fall over the edge.  It's very unattractive.

#33:  Don't forget to stay in touch with your network.  Relationships are everything in this business, and relationships only stay fresh when you stay in contact with them.

#34:  Don't get involved in business politics.  You either have politics or production, which one would you prefer?  You can't have both.

#35:  Don't do politics on Social Media.  In a business that accepts everyone, it's simply not smart to publicly push your agenda on another.  Once you start talking politics, you alienate the other side.

#36:  Don't burn bridges.  If you burn a relationship with someone, you'll never be able to cross that bridge again.

#37:  Don't be a hater.  People leave even the best companies in the business.  Do your best to keep them onboard, but make sure you don't flame them on Facebook an make a big deal about it.  Love them on the way in, love them when they are there, and love them on the way out.  Many people who leave realize they made a bad decision and want to come back.  If you hate on them when they leave, they'll never come back.  Take the high road if they decide to take the low road.  Be the better person.

#39:  Don't forget to put money away for a rainy day.  Too many people live beyond their means.  No run lasts forever.  You could be on the run of your life right now in whatever company you are in, but it never lasts indefinitely.  Save your money.  It rains everywhere, even in the desert.

#40:   Don't forget to follow up…quickly.  The more you follow up with people in a timely manner, the more who will join you.

#41:  Don't be afraid to ask for the business.  You don't get anything unless you ask for it.

#42:  Don't just call people when you want them to do business with you.  One of the biggest mistakes people make is only calling people when they want something.  Make sure to make contact in between the times you ask for the business.

#44:  Don't be inconsistent.  There's no success in being hot one day and cold the next.

#45:  Don't be disorganized and chaotic.  Work your business on a calendar and live by it.

#46:  Don't ever assume.  Just because someone did network marketing before, doesn't mean they know how to do it.  Don't ever think that someone knows or understands how to do something until you confirm it firsthand.

#47:  Don't interrupt your prospect or team member.  Listen, and hear what they are saying.  If you step all over their sentences and interrupt them, it shows that you really don't care.

#48:  Don't point your finger at someone or some thing else as your reason for failure.  It's your fault, both for winning and for losing.  Take responsibility for where you are in life and do something about it.

#49:  Don't burnout.  Take breaks when you need them to re-energize so you can get back at it.

#50:  Don't be late.  There's no such thing as fashionably late.  It's an excuse for people who think they're more important than the person who is waiting for them to arrive.

Alright!!  Well…there you go.  There's my list of 50 Things you Should Never Do in Network Marketing!  Feel free to forward to your fellow network marketing friends…and make sure to download the 25 Biggest Mistakes in Network Marketing Cheat Sheet that you see on this page.

Get your copy of my book Fearless Networking right here!

Trouble staying organized and on top of your follow up routine???
Test Drive The Fearless Networker System Today!

Financial Independence In Network Marketing Without The Mega Check

The #1 Reason Your Business Isn’t Growing