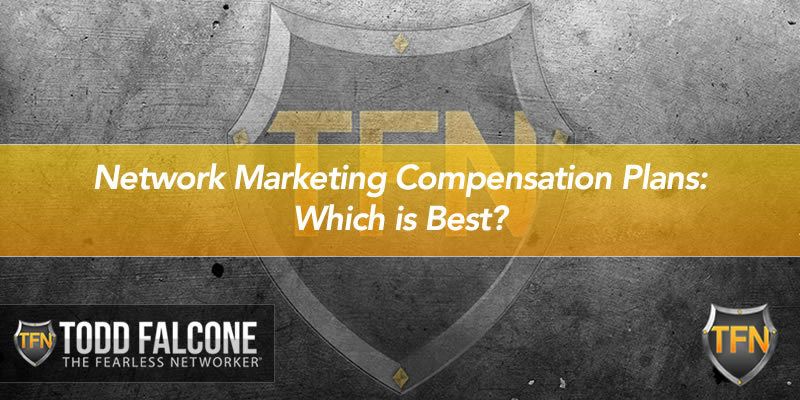 There's always a debate as to which network marketing compensation plans are best.

I'm sure a lot of people coming here are expecting to read about one specific company, or specific compensation structure that is FAR BETTER than every other option out there.

It's often quoted that “our company pays out X %…and it's more than any other in the entire profession”, or something along those lines by an enthusiastic distributor attempting to make their compensation plan look better than everything else out there.

Worse yet is the distributor who claims “we have the best compensation plan in the entire industry!”

Unless that person has done a statistical analysis and taken the time to compare every single company's compensation plan in existence today, they are talking out of their rear, and it clearly shows how amateur they are.

How Much Do Most Network Marketing Companies Pay Out?

I've found that a majority of network marketing or direct sales companies pay out somewhere in the 50% range.  In other words, 50 cents on every dollar that comes into the company is paid back to independent distributors in the field.

Sure…some comp plans pay a little more than others, and some a little less.  But…the average is around 50%.  And…even if the proposed or maximum payout is stated as such, the reality is that many compensation plans have some sort of “breakage” in them, where they end up paying a little less than what their proposed payout may be.

What's “breakage?”  It simply means that it is sales volume generated by your downline where no commission is paid.  This typically happens when a distributor has not achieved a rank in their respective company, where the volume is there, but they haven't yet qualified to earn commissions on it.

Where Does the Rest of the Money Go?

The remaining 50% goes to pay operational expenses, including Accounts Payable, Short Term Debt, Long Term Debt and so forth.

These expenses would include things like wages and salaries paid to those who are employees of that company, manufacturing costs (or costs of goods sold), IT expenses, Rent, Taxes, and other normal expenses that any other company might have.

You can't be with a company that pays out so much they can no longer be profitable.  If a dollar comes in, you can't pay out a dollar back to the field, otherwise you'll have no opportunity or product to promote.

Is there a Best Network Marketing Compensation Plan?

No…there isn't.  However, people often have very strong opinions about their own company's compensation structure.

And…there are lots of people that favor one type of compensation plan or another.  It's really a matter of personal preference.  I've built businesses in virtually every compensation structure that exists…and I never chose them by compensation type.  I chose them based on the company, and the validity of the products and services they marketed.

Some love to work only Binary Compensation plans, while others love Unilevel plans.  Either way, a product is sold, and money is paid out.

When network marketing first began…and started paying out on MULTIPLE levels of people in an organization, thus the term Multi-Level Marketing, most comp plans were called Breakaways.

Stanley Home Products, J.R. Watkins and Fuller Brush are among the earliest companies doing direct sales in the late 1800's and early 1900's.

Many people think that Amway was the first company, largely because of their name recognition in the marketplace, but the history dates back well before Amway ever existed.

If you don't know the different “types” of compensation plans out there and want a little (not in depth) understanding of them, here they are:

The Stairstep Breakaway Plan:  This is the oldest type of compensation plan in network marketing, which is also referred to as the “breakaway” plan.  The name itself describes the plan.  When a distributor in your downline who has achieved a predefined amount of personal and group volume, they will rank advance, and consequently “break away” from your group.  At that point, you would be earning a lesser override on the volume that exists in their group, and they would be earning a higher percentage on that volume, because they have “broken away” from you.   This plan allows you to personally sponsor as many people on your front line as you wish.

The Unilevel Plan:  This type of plan enables the distributor to also personally sponsor as many people on their front line as they wish, enabling them to create more width in their organization.  Most unilevel plans pay a fixed percentage of commissions on each level and limit the amount of depth in which commissions can be earned.  For example…a unilevel plan pay 5% per level, seven levels deep.

The Binary Plan:  In a binary plan, you have two legs.  One on your left, and one on your right.  You are building only two legs with a binary compensation plan.  And…unlike breakaway and unilevel plans, you are paid on volume accumulation in a leg, rather than a percentage of sale volume on multiple levels of distributors.

The Hybrid Compensation Plan:  I'm not even sure if there is an official definition for this type of plan, because it incorporates typically two plans together.  In most cases, it will be a combination or “hybrid” of both a binary and a unilevel plan.  Most of the hybrid plans I have seen, pay like a binary on the front end (initial sales volume), and like a unilevel on the back end (ongoing sales volume).

The Matrix Plan:  This compensation plan limits you by width and by depth.  For example, in a 3-by-9 matrix, each level down to nine can only have three distributors.  If you were in this type of matrix, if you sponsored a fourth person, it would follow on the next level below you, because you have a maximum of three people that can “fit” on your front line.

2-Up/Top-Tier:  When these first came out, they were typically used by higher dollar direct sales companies, that sold products ranging from $1000 to upwards of $25,000.  The first ones to exist in the U.S were companies like Commonwealth, Delphin, Investors International…and later, companies like Travel Dynamics and Liberty League.  Even though this comp plan was originally called an Australian 2-up, it didn't originate in Australia.  In today's market, most of these companies or comp plans are referred to as Top Tier plans, referring directly to the prices associated with their products.  The basis of this type of plan…in the 2-up instance is this.  The commissions on the first two sales you make go UP to the person above you…meaning they make all the commission and you make none.  When you recruit a new rep, after you have “given up”  your first two sales, they in turn would give up their first two commissions to you.

That at least gives you some understanding of the different types of compensation plans that exist in network marketing or direct sales today.

What Type of Compensation Plan is Best for You?

I wouldn't suggest to anyone that they choose their company based on the compensation plan alone.  It may come into consideration, but there are far more important things to consider when picking a network marketing company, including:

I wrote an article while back about How to Pick a Network Marketing Company that you might find useful as well.

This post isn't to suggest that you do one or the other…but simply to educate and inform you, so you that you're armed with further information in understanding different compensation plans.

Financial Independence In Network Marketing Without The Mega Check

The #1 Reason Your Business Isn’t Growing