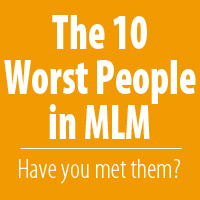 This post is sure to piss someone off.   If it does, then a good idea would be to look in the mirror and ask yourself, “Why does this make me so mad?”

As I go through this list of people, please know this.  The names used here are fictional in nature and are not tied to any specific person.  So…if I use a name here and it happens to be your first name and the badness applies to you, then it's simply coincidental in nature.

You ready?  This is gonna be fun.

#10 Wayne the Whiner:  This poor fella is so focused on what's wrong that he spends more time with tissues than in training.  He's so busy wiping his nose that he just missed out on the person in front of him that said they wanted to join.  He's one of those guys that eventually become a “red button” person on your cell phone.  If you don't get that, look at your cell phone and imagine him calling you.  You can push one of two buttons, red or green.

#9  Erin the Exaggerator: Erin makes some money, but far less than she tells everyone.  She walks around bragging about how big her volume is and how large her check, only to get caught one day when she forgot to log out of her genealogy report and a friend got a chance to see what she was REALLY making.  That friend took a screen shot of her report and posted it up on Facebook for everyone to see.  The sad thing is that she actually had a pretty decent check, one that a lot of people would be thrilled to have, so there was no need to exaggerate.  Ooops!  There went the reputation…and it didn't even have to go that way.

#8 Dick: This particular person doesn't need to be called by any other name.  He needs no first or last name, it speaks for itself.  He is one of those guys that treats his downline like trash, failing to realize that this is actually a volunteer sport that people do because they want to, not because they are forced to.  Dick goes on every day pointing his finger at people telling them what to do, while all the while he does nothing.  Dick isn't very nice.  And…Dick's team is dwindling.  Dick is experiencing team shrinkage.  If Dick would simply smile more and be more kind, he'd realize that people would stay.

#7 Crossline Chrissy:  Poor girl thinks she is God's greatest gift to network marketing and that her company is the only game in town.  She goes around writing letters to people in different companies offering them a “spot” and a unique opportunity to take part in the greatest thing that has ever lived, putting all others down.  She spends most of her time recruiting people from other companies rather than actually growing our profession, showing her true weakness.  Instead of “lifting up” our space, she degrades it.  The thing is, her company is actually pretty decent and she'd likely make a more positive and lasting impact on the world if she just focused on talking to people that NEED or WANT an opportunity, rather than stealing from someone else.

#6:  Johnny the Jumper:  Johnny is well-liked by most…at least for a while.  He has a really great personality, but no patience.  He's actually pretty decent at recruiting, mostly because he's fairly charming.  Unfortunately, his fatal flaw is the inability to stick to something for more than a couple of months.  After about 15 deals, Johnny's friends no longer follow him.  The last time I saw Johnny, he was making sandwiches in a Deli down in Orlando.

#5:  The King of Whales:  This dude talks all the time about “how all the whales are coming in”.  He's one of those guys that you NEVER ever hear from until he's onto the next deal.  Then…when he calls you, it's like you are his greatest pal ever.  You're the BEST of friends, even though the last time you talked was nine months ago when he was pitching you something else.  You've heard this so many times before that you can literally lip it…wait, here it comes, “Todd…all the whales are coming in.”  I chuckle every time he calls.

#4:  Blaming Billy:  This guy is always talking about how his sponsor wasn't good enough, or how the system sucked.  All the while, every company he has ever been in, people are making money.  It's always somebody else's fault and never his.  Poor Billy goes through life pointing fingers and assessing blame.  The best thing for him to do what be to go to the carnival and enter the House of Mirrors ride.  There…yes, there is where he will find his answer.

#3:  I'm going to make you…Rich:  I've met Rich a whole bunch of times.  Rich talks a lot…until he's gone.  Rich comes in and never listens because he knows it all, even though he's never made a dime in this profession.  He talks about all the volume he is going to create and how you'll never have to work again a day in your life now that you have him in your downline.  Rich was done the moment he opened his mouth.  He's cursed.  I've met many Rich's in my day and NONE have ever done anything.

#2:  Paralyzed Paula:  Poor girl is scared of her own shadow.  Wants to make money for sure, but can't seem to get out of her own way for even a second.  Paula keeps looking for all the answers even though she's already been given access to all of them.  Paula keeps calling you asking for help, even though you've given it to her time and time again, and even offered to make calls with her.  She starts calling around to others on the team asking for help, insinuating that you're not willing to assist.  Interesting girl.   Have you met her?

#1 Reinventing Rhonda:  She saved up her money for almost two years to join YOUR team.  She's so excited to “finally” be working with you and to follow your lead.  Bummer though.  She won't listen to jack.  She knows you're a leader in the business and that you have a long and proven track record of success, but she's going to do it “her” way, all the while “saying” she is teachable.  Then…she gets mad at you two months into the deal because you have stopped returning her calls.  She hasn't done ONE thing you suggested.  She didn't go to the training site, hasn't attended an event, isn't going to conference, and hasn't event talked to one person in her warm market.  Now…in her mind, it's your fault.  Crazy how things work, huh?

So…those are 10.  There are more, but since I talked about 10 in this post, I will keep it there.  Do you know any of these people??  Ever had the pleasure of working with them?

How to Get Good at Inviting

How to Get Rid of Prospecting Reluctance

Why People Are Turned Off By MLM

Creating Momentum with a Stagnant Team