Who are the Top Network Marketing Companies?

Who are the top MLM Network Marketing companies today?  And…how do you go about “ranking” them?

What makes them them the top?  Is it the network marketing company who has the most people earning a
check?  Or, the one with the biggest distributor force?  How about the MLM company with the person
earning the biggest check?

You could certainly rate or rank MLM companies based on any of those criteria, but probably the simplest
and most accurate way would be based on sales.

Direct Selling News posts their DSN Global 100.  This is a great validation piece that they put out each year
as it lists the Top 100 Direct Sales Companies Globally based on revenue.  The most recent ranking here
was based on 2010 sales figures.

Some interesting findings in this recap I'm doing here.  In the 2009 ranking, a company had to do at least
$67 million to get on the list.  In 2010, that number jumped to $80 million.  That's a great sign, considering
the economic recession that began in 2008.  Things appear to be looking up.  We like that.

Total wholesale volume in 2010 by the top 100 Direct Sales companies was $66 billion.

And…the Top 10, which I will be talking about here accounted for $39 billion.  Over 43 million
distributors/consultants are involved in our profession worldwide.

So…just remember this kind of stuff when you are dealing with nay-sayers or even questioning your own
involvement.  This is BIG business, and there are millions of people involved.  This kind of stuff makes me
sleep restfully at night.  It should give you some peace as well.

Let's look at the Top 10 MLM/Network Marketing/Direct Sales Companies based on 2010 Revenue:

Some notables that didn't make the Top 10 Network Marketing company list, but DID make the top 100
that I'll mention are: 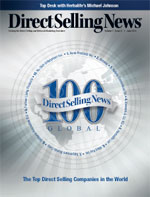 There's a whole bunch of others that I'm not going to reference in this post.  My
suggestion:  become a subscriber of Direct Selling News.  Or, grab a copy
of the DSN Global 100.

As an individual in this profession, a wise idea is to be wise.  Educate yourself.
If you were a Golfer, you'd likely subscribe to Golf Digest, a Skier would subscribe to Skiing Magazine.

This is great validation for the size, overall magnitude and the players in our
profession.

Todd Falcone speaks and trains on the subject of network marketing success and helps people move to a position of achieving Network Marketing Mastery®. He also consults network marketing company owners as well as coaches and trains top-level distributors throughout the profession. Todd is a husband to his wife Carla, and a father to his two boys Gianni and Joey. He’s a surfer, a skier, a golfer, and loves to fish and play in the outdoors. Start accelerating your network marketing business today, download Todd's latest CHEAT SHEET on this page.

Network Marketers: How to Keep your Customers

A Wake Up Call and the Future of Network Marketing

Previous Post How to Dump your Phone Phobia Next Post Cold Market vs. Warm Market: Which is Better?